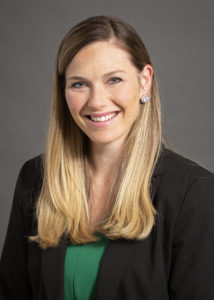 Betsy S. Murray, M.D. is a native of Syracuse, Nebraska.  She completed a BS in Biological Sciences with a minor in psychology at the University of Nebraska-Lincoln in 2006.  Dr. Murray then completed her Doctor of Medicine degree in 2011 at Emory University School of Medicine in Atlanta, GA.  She finished an anesthesia residency at the San Antonio Military Medical Center in San Antonio, TX in 2015, and served as a Major in the Army from 2011-2019.  Dr. Murray is Board Certified by the American Board of Anesthesiology.  She is married with two daughters and two sons.  Her personal interests include cooking, biking, attending Nebraska sporting events, and spending time with her family.  Betsy has been with Associated Anesthesiologists, P.C. since July 2019.